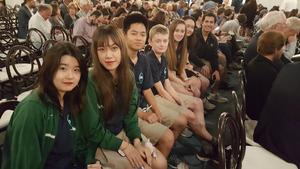 Monday night, Nov. 4th, seven LSA SWAC members attended a book review and talk by Susan Rice, who recounted her storied career and experiences as the National Security Advisor to President Barack Obama and U.S. Ambassador to the United Nations, taking the students behind the scenes of some of the recent national security challenges including increasingly-complicated relations with Russia and China, the battle against ISIS, Russian interference in the 2016 presidential election and President Donald Trump's transition to the White House. She also described some of the battles she faced getting into these positions of authority in government. Her book, Tough Love: My Story of the Things Worth Fighting For, was also part of her explanation of how she achieved these goals.