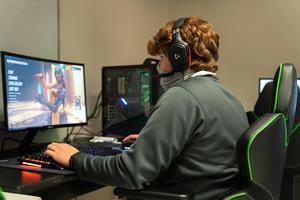 Competitive gaming is extremely popular in the world of sport these days and LSA is joining in the fun! Click here to learn more about LSA's very own eSports team.

Lutheran South Academy (LSA) recently added eSports as an official school team to their repertoire of after-school school activities.  The arena, which is home to the 30 members of the group, is complete with a brand-new gaming arena that includes twelve ASUS gaming computers, 24” monitors, mechanical keyboards, and RGB lighting.  The LSA eSports team is part of the Texas Association of Private and Parochial Schools (TAPPS) Esports League.  The team has already been involved in direct competition with other schools. The Esports competitions encompass many different styles of games including: Overwatch, Rocket League, League of Legends, SMITE, Fortnite, Madden 21, and FIFA 21. LSA’s current team competes with Overwatch.

The team practices the same way an athletic team might. They gather together after school, work on their mechanics and tactics and even watch film of earlier games. Students can gather together both in person and remotely to practice and play matches. Players use headsets to communicate over Discord, a social chat platform that lets players create a profile and interact with other users via online messaging, voice or video chat. It also allows to have a personalized sound experience.

Adding the eSports program is an example of the cutting edge and innovative opportunities that LSA has to offer in addition to a traditional high school experience.  The ESports genre focuses on a completely new realm of competition and offers an opportunity to compete at a high level for students who have a passion for gaming.

LSA eSports coaches, Jon Maxwell and Helen Peace, quoted the PlayVS article Parents Guide to High School Esports which states: “Esports requires a tremendous amount of critical thinking, communication, collaboration, and creativity from players to achieve and sustain success. It reaches beyond traditional sports to create an all-inclusive environment that breaks barriers.” They see the team as a place where community comes and competition merge. They seek to create a friendly and welcoming environment where students will converge on their enjoyment of video games. It is their dream that the chatter and excitement of students working to improve their skills in room 105 will be heard daily after school. Because, after all, LSA’s eSports is only going to grow from here; it isn’t going away.